This is a resource pack made for Stencyl that will enable you to create cutscenes for your games. From NPC interactions, dialog and treasure chests to enemy AI patterns, and even entire Visual Novels, this resource pack gives you the tools to create scripts, which can be used in a variety of ways. This pack features versatile day and night cycle system, enabling you to create NPCs with their own schedules, as well as a robust dialog customization system. Finally, a behavior to configure gamepad and keyboard controls is included, allowing you to create your own menu to change controls in-game.

If you want to see some of the possibilities of this resource pack, you can play the HTML5 version of the sample game on this page.

By purchasing this pack, you get the resource pack proper, documentation and some sample scripts. You also get a variant of the resource pack that includes RPG element behaviors, such as managing skills list, experience, character status, combat statistics, damage type and status condition resistances.

A free version is also available for download, the Simple Events Manager, which is a simplified version of the cutscenes manager behavior. It can be used for simple cutscenes, and hopefully will give you a taste of what you can get with the full version.

If you've used my Miscellaneous Behaviors or RPG Elements resource packs, all of the behaviors in them are included here, everything integrated with the scripting methods.

In order to download this Stencyl resource pack you must purchase it at or above the minimum price of $10 USD. You will get access to the following files:

Hey bud i wanna buy this resource pack. i downloaded the miscellaneous pack to test it out. Haaving trouble fixing player getting stuck to sides of platforms. is there a fix in this pack for that?

You'll have to elaborate a bit. Are you using your own behaviors for movement? What do you mean by "sides of platforms"?
The cutscene pack replaces the miscellaneous pack, as it contains everything in the miscellaneous pack and more. Both packs have the "Player Control" behavior for platformer movement and it works pretty well. Issues with actors getting stuck while using it would mean problems somewhere else, such as the actor's friction settings, or if your player is standing over a row of missaligned actors.

Sry ya im pretty new at this. I mean when i make the character jump he sticks to the sides of tiles rather than falling if i keep holding down the key. Sry I looked for someway to message you directly

That is independent from your code. That issue is related to friction. This video explains it in detail:

The short of it: set the friction to 0 for your actor. My "Player Control" behavior from this pack already handle slowdown and everything else.
Reply
ichimitch1 year ago

Not sure this is the  right place for Questions, if not please let me know, but I've just downloaded the cut-scene pack, imported it and attached the behaviour 'Dialog Interface' to an actor, but when I compile it fails. When I open the failed behaviour it appears to be missing parts (see screenshot). Any ideas? I'm using Stencyl (4.0.2) Cheers 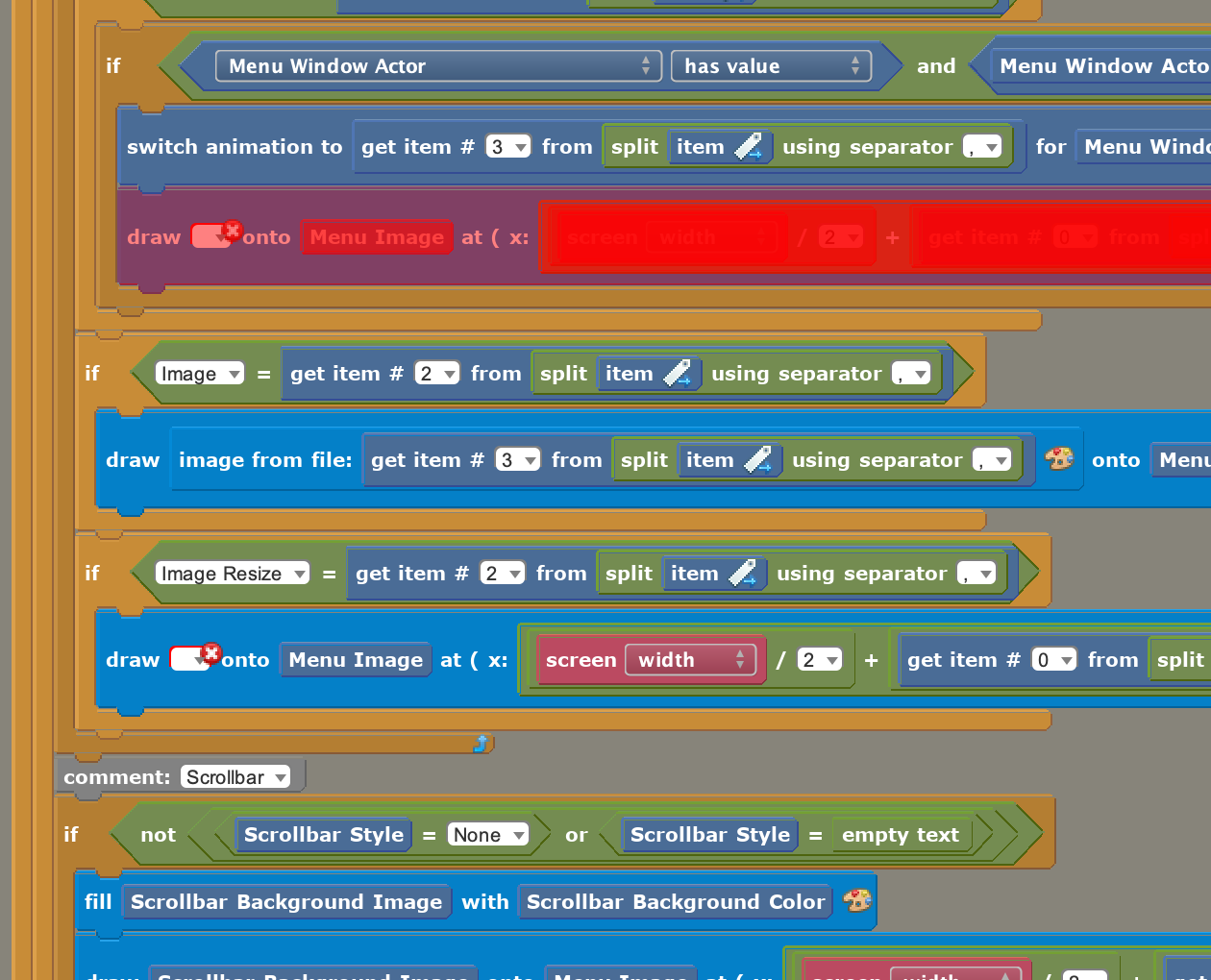 Not too worry, my bad I was trying to apply the behaviour from Resource pack, not the logic behaviour... All good :) Looking forward to playing with it

No worries, glad it is working! And it's alright to ask questions here!
I hope the documentation will work for you, but either way I'll make a video explaining the dialog interface behavior in the coming days, and I hope that will be of help.

Hey Luyren, the docs are fantastic and I've already implemented a few of your behaviours :) I do have a question, do you have any advice/ideas on the following scenario. I have two actors in a scene, I've applied the dialog box to them, now I want to switch the order of conversation, so there is some back and forth conversation, for example:

A: hi, how you doing today

A:Do you want to go out somewhere?

A: Okay I know a place

There are a number of ways to do it, depending on how you setup the dialog interface for each actor. I recommend using the Events Manager behavior in your "NPC" actor.

1- If your dialog is set on scene coordinates, you can just make the same actor use different presets to represent different actors speaking. If you are using the dialog like speech bubbles at each actor's position, use the other mehtods.

2- If your player is pressing a key to activate the cutscene when near an actor, then you have to use the "Set Actor" event to switch between "Self" and "Player Actor." That way, when you reach the dialog events, you'll be calling the dialog for different actors.

3- If your actors are not colliding or interacting via key press, you can use the "Get Player Actor" event. Then, use the same method described in 2. The player actor must be on screen for that event to work.

4- If the dialog doesn't involve the player actor in any way, you can use Instance Customization for the actor that has the cutscene script, configure the "Cutscene Actor" attribute to the other actor you want to take part in your dialog, and again use the Set Actor event, now setting it to Cutscene Actor (check the attribute's description in the Events Manager behavior).

5- This is a bit more convoluted: you set up a script in each of the actors you want to speak in the dialog. You set a global value to increment by 1 after each dialog, and the scripts just use that global value as a condition to play the dialog for each actor. It becomes a sort of back and forth between two scripts.

The Set Actor event basically switches which actor is being target by the events.

This is a script that has an example of back and forth, using the "Get Player Actor" event. Only I'm changing between the Player Actor and a Stored Actor at key 0. If you create actors through the cutscene script, you can store them and reference them later to be targeted by events like this.

You can check the specific of those events in the Behaviors List file. Go to the Events Manager explanation, and look for the "Events" explanation. That info is also in that attribute's description in the Events Manager behavior itself. But either way, I'll definitely include that in the expanded video documentation!

Dude, thank you for the response, so many options and approaches. Love it!